George, aka Georgie Boy (but only his mama calls him that) is our loveable, 10 year old ginger tom.  He joined us when he was just 3 months – he in fact picked Jen out.  She entered a room looking to adopt a kitten and he marched right up to her, purring and wouldn’t leave her side.  He still follows Jen around throughout the day (even sunbathing with her) and at night, he can usually be found, curled up, snoring on her head.

George enjoys cooked chicken dinners, chasing you up the stairs, begging for food (he might be part dog) and cuddles.  He’s also a bit of a mama’s boy.

However, sadly he doesn’t share our love of travel – even the 5 minute walk to the vet’s is a nightmare for him.  We’re fortunate enough to have some really awesome neighbours who take care of George while we’re away and he’s now moved in with one of them for the next year.

We now he’ll probably spend much of the year sleeping/relaxing, but we’ll be keeping in touch with our Georgie Boy via whatsapp, facetime and of course, this blog! 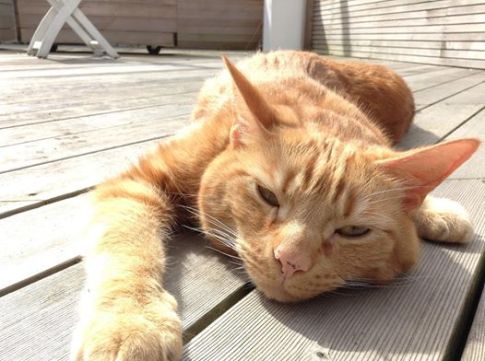