Still travelling with Lindo (the dynamic duo that is Jen’s sister, Linda, and her husband, Lando), after Calafate, we headed to Ushuaia – otherwise known as Fin del Mundo.

Settled along the Beagle Channel, Ushuaia is billed as “the end of the world” because it is the southernmost city.  Fort Williams in Chile (also on the Channel) is actually further south, but the folks in Ushuaia will wave that off since Fort Williams is just a “town”.

Anyways it’s fair to say that we were some of those tourists and fell for much of the hype.  On our first afternoon in town, as we were exploring the making plans for the next few days, we made sure to stop into the tourist centre to get our passport stamped from Fin del Mundo.  We even went back on a later day to get another stamp for Linda (they had 4 to choose from) and for Jen to get both her passports stamped (USA and UK).

So what did we do the next day, our first full day in town?  We rode the most southernly railroad of course!  The Fin del Mundo train, which takes you through Tierra del Fuego National Park.  It actually began as a train used by prisoners who were made to work the logging industry in the area. 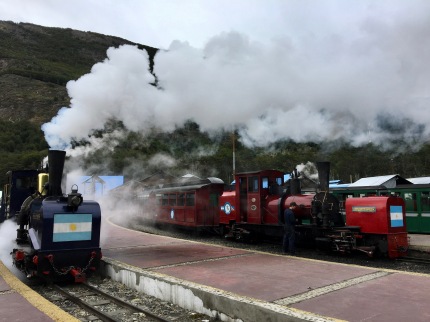 As the prisoners are all long gone, where does it head to now, you ask?  Well the most southernly post office of course!  Which is pretty much a tiny shed on a dock run by one enterprising man.

He sells postcards and stamps from the end of the world and will also stamp your passport – quite extravagantly as you can see. . .

Tourists eat it up and there was a long line inside the shed.  The line included Jen and Linda as they sent a postcard to their parents (and of course got their passports stamped.

Tourist duties over, we enjoyed a small hike and picnic lunch at the end of the world. 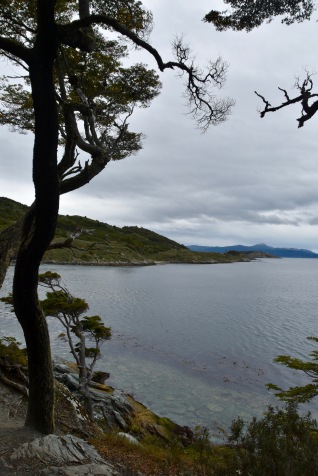 After heading back to our Airbnb place, we rested and cooked an early dinner (or early for Argentine standards), since we had big plans for the evening – we were heading to the southernmost casino!

We arrived there around 8:30pm and as everyone else was probably still having dinner, the place was fairly empty.  Sure, there were people on the slots (there always are), but we opened up the tables and headed straight to blackjack (Jen’s preferred choice).  We were all in the game, but gradually we all lost our money – except for Jen, who ended $10 up.  From the backjack she actually ended $9 down, but with her last $1, she took a risk on roulette and it turned out well.

By the end of the night, more people fortunately joined us on the tables, including some very talkative old, Argentinian gentlemen at blackjack and a French sailor on roulette.  However, it was never the fun, crazy party atmosphere as some of the tables in Vegas. . .

The next morning, we woke up early and excited as today was the day we came to Ushuaia for – we were going to see penguins!  PENGUINS!  And not just see them, but walk amongst them and become their best friends.  Outside of Ushuaia is Martillo Island where there are colonies of both Gentoo and Magellan Penguins (and interestingly a few King Penguins).

There are many tours that take a boat to the shores of the island, from which you can view all the beautiful creatures.  However, we paid the bit extra (it was pricey) and booked with Piratour, which is the only company that can take small groups of people to walk around the island.

Yay penguins!  Jen was particularly excited!  And after a bus ride, waiting through a nature presentation and then a boat ride, we finally approach the island.  And there’s tons of them!  Just hanging out on the beach! 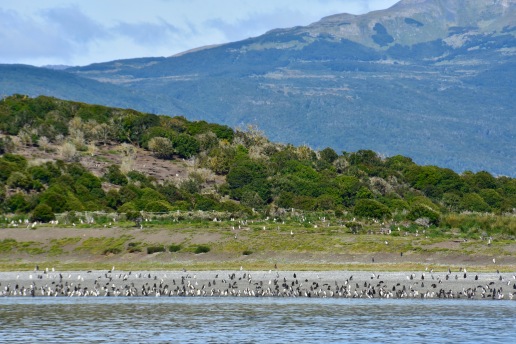 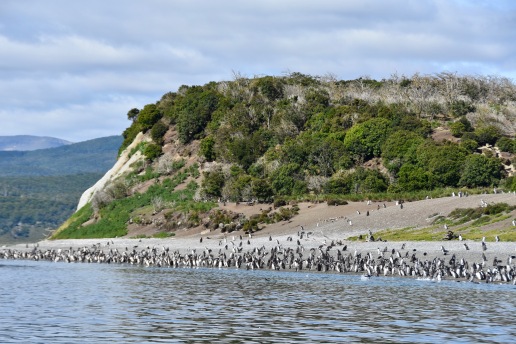 Once standing on the island, it was magical! So many penguins and all so close to you! 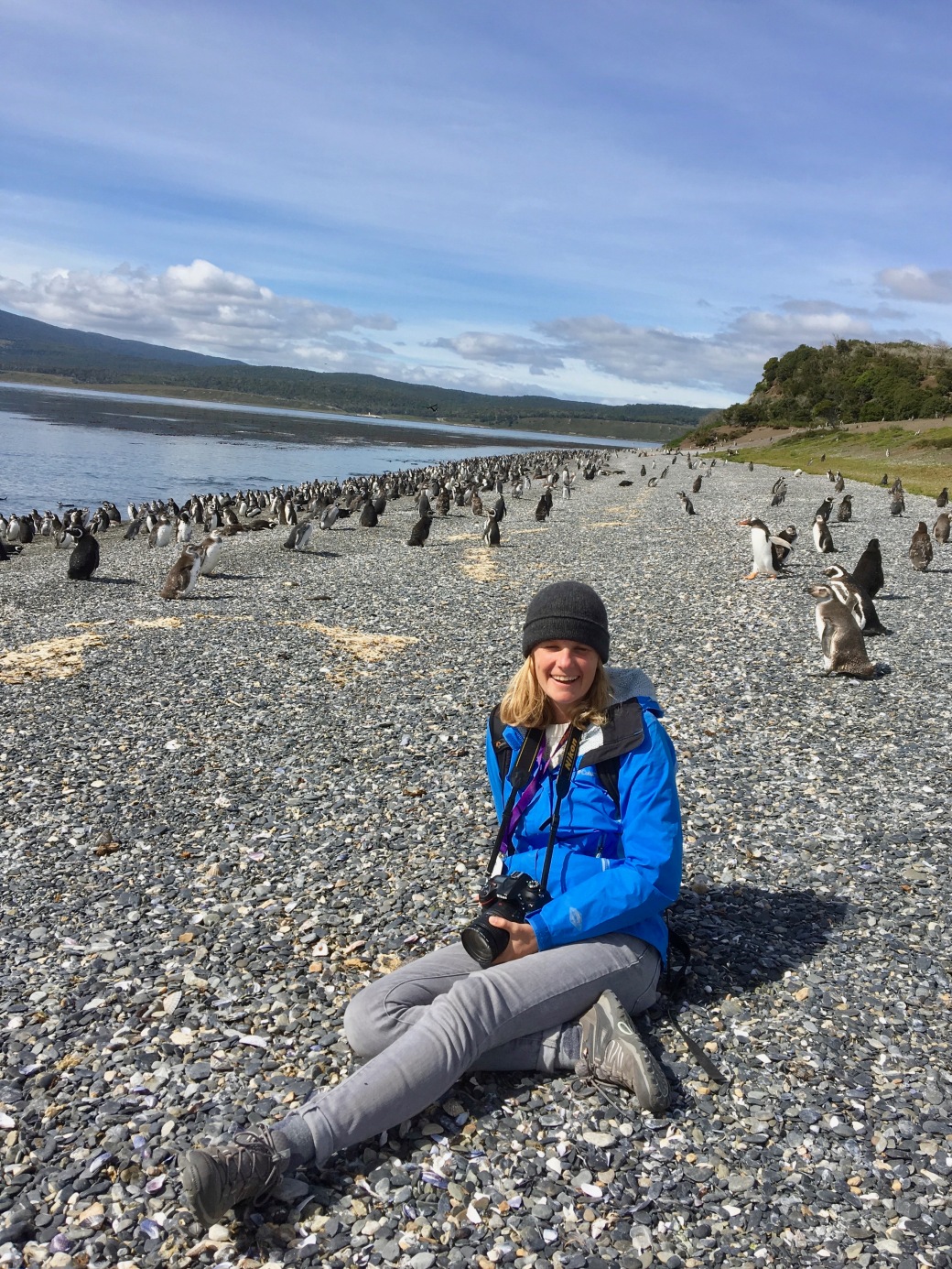 Granted if you got too close, they would move en masse and it would freak them out.  Yet you could easily be less than a meter away without them minding. . . 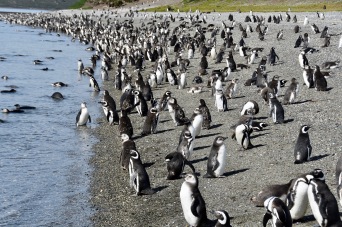 After hanging out on the beach with them, we went for a guided walk around the island. 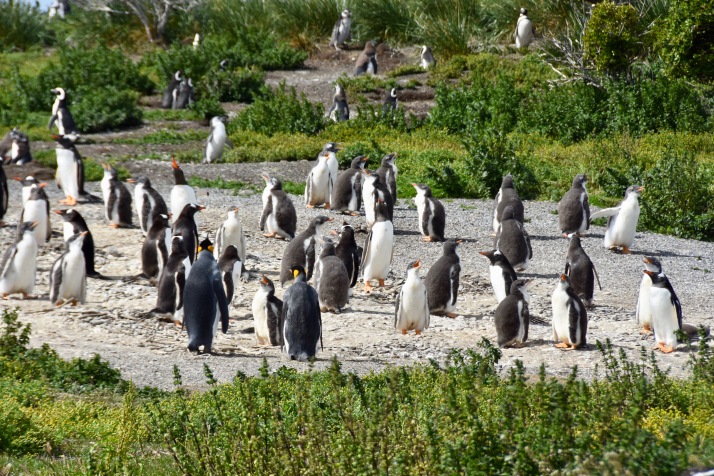 As part of our walk, we saw the burrows and the babies – who were actually largely grown up by this time of year (some were larger than their parent). 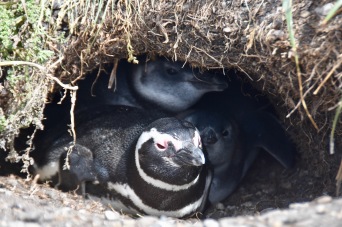 We also saw some babies being fed. . .

Oh, so many penguins!  Jen went photo crazy.  She particularly liked all the different personalities that manner of the individuals seemed to have – here’s a few of the characters: 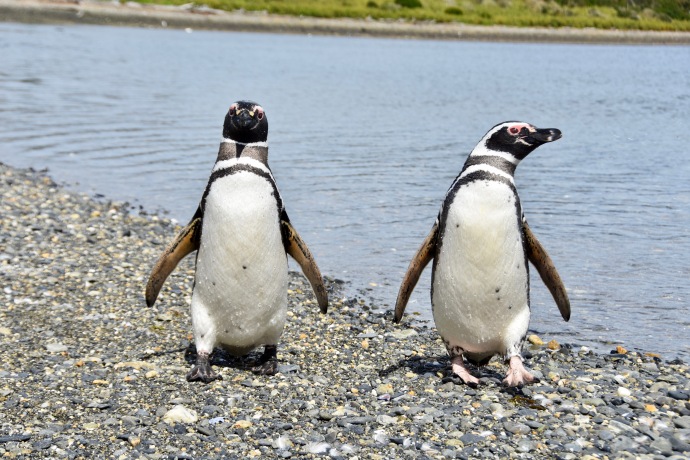 And finally, a King Penguin, hiding amongst the Gentoos. . .

It also took all of her self control not to try to cuddle one of them.  Or try to take one home (she decided that if she had, its name would be Herbert and she’d buy a separate freezer for him).

After about an hour on the island, sadly, our guide made us leave.  He had to drag Jen.  On the boat ride back to Ushuaia, we also passed a sea lion colony, as well as a small island full of various bird life. 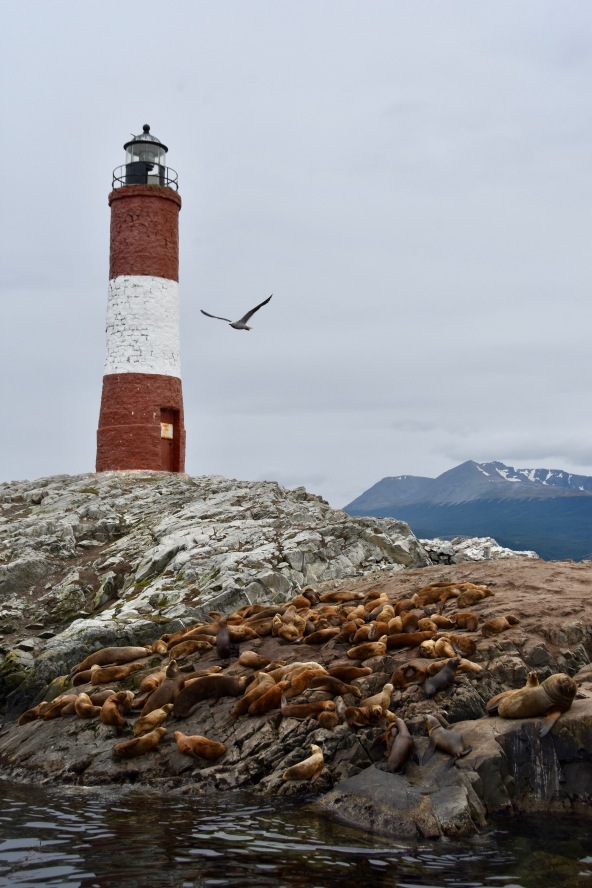 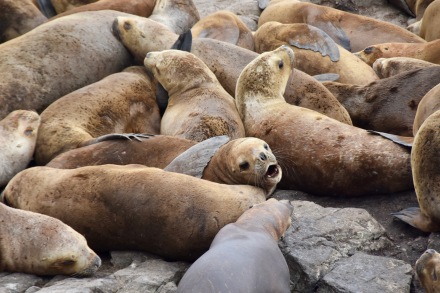 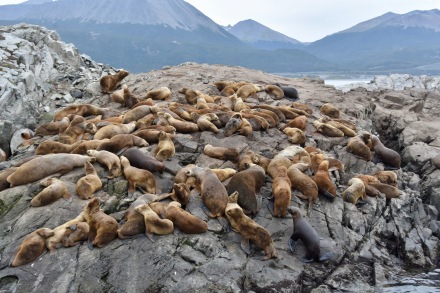 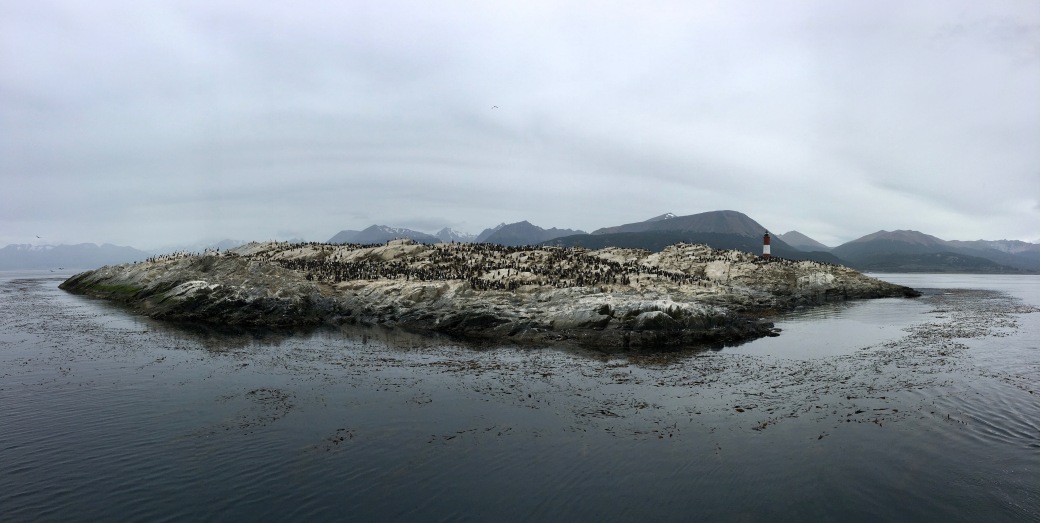 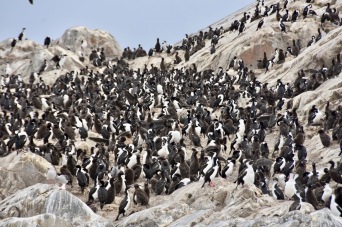 On any other day, both of these sights would be amazing, yet we had just walked amongst penguins, so we were a bit jaded. . .

What an experience!  And it was the perfect finale to our trip with Lindo, since they would be flying back to the states the next day.  Nothing could be a better send off than the penguins, but we still tried to make a night of it and went to a fancy restaurant for dinner.  Chez Manu had a great view over the city and the Beagle Chanel and served fantastic food.

Even Petit George joined us for the evening.

What a great last day to spend with and say adios to family.